An early start for David and Rex in sub-zero temperatures: David picked up a van to transport Rex’s retired garden table and chairs 30 miles to Iver. The van had an opening of 6 feet 3 inches, and the table was 6 feet no inches across. Then there was all the legs and undercarriage and stand that went with it. And the van had doors that we couldn’t fold back. And there were wheel intrusions just the wrong place in the van. And it was jolly heavy. And neither of us is in the full flush of youth and muscularity. But, after half an hour of struggling, and just before giving up, it was a like difficult obstetric delivery – and it popped through the birth canal before we even knew it was happening, and we were on our way. 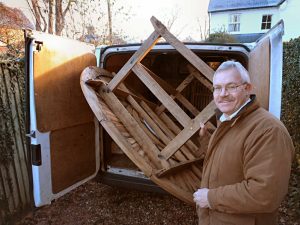 Just as we were getting onto the M4, the phone went – and it was Ruth from Iver saying the place is shut because the’re no water, loos, ability to cook. The workmen installing new transformers at the National Grid substation next door had excavated through the water main. Members of the group arrived and were rather disconbobulated on being told this, and were installed in the warmth of Ruth’s office.  Rex and David arrived, with table, shortly afterwards.

After unloading the table, we decided together to go to the local garden centre cafe to have our check-in and first group. Which wasn’t the same as doing it in the yurt, but at least gave us all the chance to touch base and work through some of the uncertainties ahead – with staff leavings, and the plans to bring the phases into the Embrace programme. We didn’t manage to do any planning for the Hope Recovery College Open Day next Tuesday, so its now uncertain what will happen about that – it might not have a GBL stand. Nor did we manage to do the flower feeling scale. Sometimes events just get in the way.

We finished off the day with a site visit to Lavender Farm – lots of potential there, but we mustn’t get our hopes up too much until it has all been agreed by the council. A quick check-out, standing in a circle by the van, before David took people home. 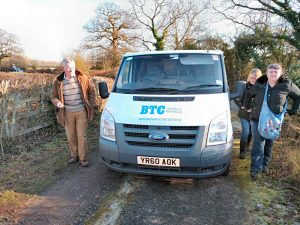 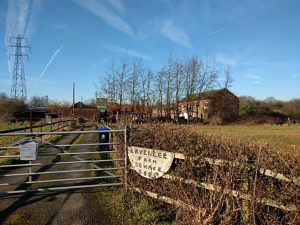