The first thing we tackled was planning the harvest party – due for September, with the embrace group. We had a theme of food, and all sorts of great ideas came out – from harvest loaf competitions to vegetable animal sculptures and felt collages. But the wind went out of our sails when we later learned that the site will probably being fully used that day – and we won’t be able to use the building. So some rethinking needed here.
We had our usual nutritious, vegetarian and partly vegan lunch – on the pond platform in the sun. All tastes accounted for!
After lunch, we all took a trip to the Langley Blacksmiths showrooms to look at the stoves – one of which we’re going to get as part of our yurt makeover. 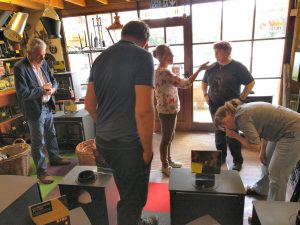 In the Blacksmith Shop

There was a gorgeous round one, which swivelled round on its stalk, and was much beloved by Sharon – but sadly well outside the budget. The two on our shortlist, widescreen and basic, were cool and modern with big self-cleaning windows. The final decision will be when we work out exactly how much is in the kitty…