That ‘aint no donkey …. it’s only Rudolf the Red Nosed Reindeer

We welcomed two lovely visitors, Caroline and Nicola, from Enabling Environments at the Royal College of Psychiatry who came to visit our yurt today.   It was lovely to meet them and hear about  projects including a Greencare group called Plot 22 which made us excited about being  more self sufficient with compost toilets and solar panels.  We are hoping to go and visit the projects we learned about at some point and also to think about ways in which our groups could collaborate in the future. 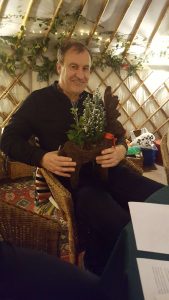 James and Rudolf the red nosed reindeer (not a donkey!)

We welcomed back Lynda and Sharon who had been off last week.  We were also pleased to welcome another visitor for Christmas,  Rudolf the red nosed reindeer who we thought was a donkey all day!

Check in was as usual both supportive and helpful  especially to those who hadn’t been at group last week.  After a short break we discussed what activities we would do today.  We also talked some more about last week’s unannounced mystery visitors that had evoked some anxiety and uncertainty in the group.  We spent some time exploring these feelings and considered the more positive possible prospects including joint future plans for Greencare to work with Hope Recovery College in slough.

We split into groups, one group of chefs who produced a delicious lunch of potato and leek soup and the house speciality, and the other explorers who took a tour around the site and took part in our initiation ritual of sliding down the slide. 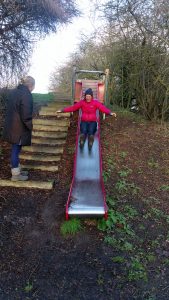 After lunch one group washed up whilst the other watered our seedlings which were not only alive after the snow and ice but looked really healthy.  The seed and fat balls that were gobbled up by the cold hungry birds (or squirrels) were replenished and the yurt was made tidy and cosy for the afternoons activity. 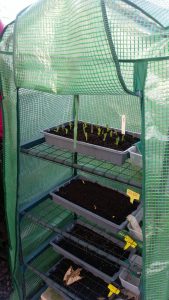 Seedlings alive and well despite the snow and ice

Hils showed the group a draft press release she had put together that the group members can add to and use to contact the media to spread the word about the group and how Greencare can be beneficial to both people and the planet.  No time like the present, we contacted the Observer, the local newspaper who were interested in running our piece about Hayley and Sam’s fundraising and thank you tea party.

What a busy day! After check-out, we bid farewell to Caroline and Nicola hoping to see them again some time in the near future.