Johnny arrived in the yurt with some trepidaton. He is four feet long, smoother than Johnny Depp (who he is named after), rippling with powerful musculature, cuddlier than a cat and more mesmerising than a tank of fish. A royal python he is. He soon made friends with David, knocked his glasses off and curled round his neck as a living scarf. 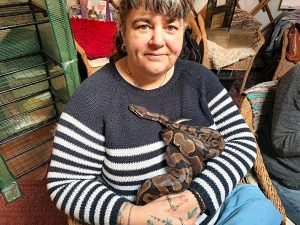 Outside, Doris blew her windy way – with flapping of the canvas and creaking of the woodwork. If it wasn’t for the trees around us, the yurt would probably have taken off – and maybe landed on the wicked witch of the west.

Hils brought in her spare mini-greenhouse, and we put it up in the yurt – ready for planting everything in the spring. We are planning to start that next week. The scarecrow now has hole, a heart and a head.

Lots of laughs over lunch – Sharon’s super soup – and a game of word association that went rather random.