Self-sufficient and supporting each other

A cold, wintery day and people were pleased to see the fire going when they arrived in the yurt to greet Vanessa and David – who were pleased to see them too (and especially  Duke again, as always he got all the fuss).   Check in covered lots of concerns for ourselves but also the people we look after in our everyday lives – it  can be hard juggling caring for other people, while managing ourselves. 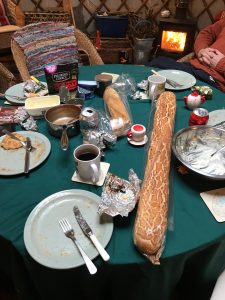 The kitchen was ‘off-bounds’ today so we became self-sufficient in the Yurt, making lunch by cooking the eggs and beans in pans on top of the fire, and re-heating (too much) the already cooked potatoes. It was a very positive lunch that we had made on the wood burning stove and we all felt stuffed and sleepy after sharing it!

After lunch we filled the bird feeders and washed up.   A supposedly ‘squirrel-proof’ bird feeder has us stumped as to how to open it (not just squirrel proof but David proof too) but eventually we managed it and the birds  should be grateful 🙂

We talked about what was happening and some ideas of actions we could take. Lots of ideas, lots of discussion.

People felt very anxious about the ending, whether it was worth attending because it was ending, feelings of desertion, cruel closure and wanting to roll up in a ball were expressed. It seems that much else is ending for people, but it often seems to reflect back to the closure of the Yurt. People never felt they would find a place like this, that kept them alive, and now it is threatened with closure. But we supported each other and made sure we all felt we could say whatever we needed to, looking forward to coming back to the yurt to be together next week