Laughter and belonging in the GreenCloud

The GreenCoud gang meet up as usual on Wednesday ready to share their stories of nature and have some fun! Anxiety was affecting a lot of us at the start, and some pain and anger, alongside feelings of being pleased and comfortable to be in the group.

A theme quickly arose when we started sharing our nature experiences – we had all been encouraged by Rex’s ‘tree talk’ last week that we had been thinking of other tree phenomena to present to him! Leanne had research 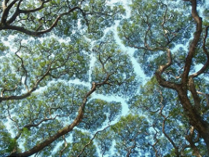 ‘Crown shyness’: this was new to all of us and is the amazing way that particular types of trees grow so that the branches at the top, in their ‘crown’ never touch those of another tree. Some really stunning pictures of this can be found on the internet, such as these included here – but there are varying theories as to why the trees grow like this – is it to avoid infestation or is it  to maximise sunlight?

were also shown the picture of this insect, and asked to guess what it was (answer at end of blog!)*. 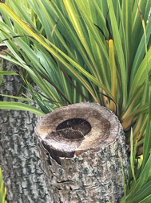 pollarded palm tree and the new branches growing. She had also captured a small waterfall and pond inhabited by many different fishes, including gigantic carp. However these weren’t so clear in the photo so she was disbelieved and vowed to go back and get better photos to prove her case!

strange looking tree was shown to us – this is in a member’s garden but was the victim of a fire caused by a thrown away
cigarette. Just to be contrary, Rex had changed his usual walk with the dog through the woods and went out into open field, which he described as ‘boring’: still some great photos though

including these seed pods. And another case of plants seemingly damaged by fire, yet nature will repair and recover and make these stronger than ever!

and trees in photos taken by our resident cyclist, around Crowthorne. This photo was of Heath Lake: we loved the amazing reflections in the water .

Some lovely pictures of flowers were shared. This one was particularly emotive – does it present something dying away or a blast of brilliant colour a little tired at the edges?

Bunches of flowers were shared by Sharon

who also showed us her ‘baby’ – Garfield!

Our equine member has been in the wars and had to be sedated to have some e x-rays taken. 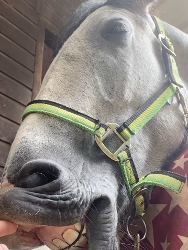 Whilst she was anesthetized her owner took the chance to have a ‘play’ with her lips and we had a great view of her teeth!

Our short comfort break, then we discussed our picnic ideas – but these are but on hold with the new Covid restrictions of ‘no more than six people’ We also though about future planning for GreenCloud to ensure its continuity. Then onto fun with our version of ‘Who Am I’. Vanessa forgot how old she was and that younger people probably wouldn’t ‘know’ her favourite cartoon character Snoopy, but Sharon managed to recognise herself as the yellow canary Tweety!

Checking out found us all improved in mood. Lots of us chose two or three Planticons but EVERYONE included in their choice our Daisies being ‘Playful and Fun’. 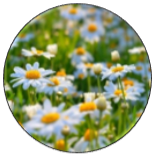 Much to enjoy in spending our GreenCLoud time together, connecting with nature and having some fun!

* Answer to question above: this is actually a  Black Bee. Its Latin name is Apis mellifera mellifera, and they are an endangered species.