Our nature share included, as always, some great photos of natural scenes and animals. 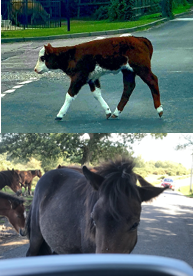 Two of our members had visited the New Forest over the bank holiday weekend and spoke about the lovely landscapes and the animals roaming freely.
Baby cows trooping across roads were favourites, as were the many ponies, one of which was so intrigued he managed to get his head inside the car window! A really restorative environment to spend time in!

Lots more animals in our group: we visited on-screen Nala the kitten, JC the white cat and Burl, a beautiful Staffie-cross. Left us all wanting a kitten and a dog,

and here you can see just how comfortably they can live together!

Then Sharon gave us a viewing of some of her reptiles, past and present. These included an albino Chinese soft-shelled turtle, an Ackie monitor (who used to go for walks on a harness), two geckos, one beautifully patterned leopard gecko and an amazing crested gecko. Then her beloved Royal Python Johnny, some foam nest frogs, her Blue-tongued skink and finally the Bearded Dragon Ed, pictured here. 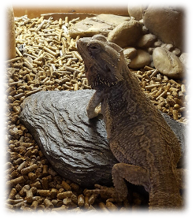 These are beautiful creatures, and make great pets but many of these are ‘rescue reptiles’ – they are not easy to keep and do required feeding some stomach churning items including live locusts…

Back to some more peaceful pictures of nature! 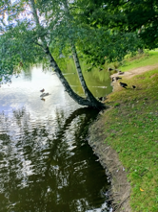 Our resident cyclist shares phots of the lakes in South Hill park in Bracknell. We particularly liked this one of the North lake with such clear reflections in the water. Then Rex gave us some more of his favourite trees plus copious amounts of knowledge gleaned from his

new book, including the difference between Coppicing and Pollarding. Left along, our woodlands do look after themselves, with fallen trees providing great areas for all sorts of things to live.
We especially liked this photo showing how new branches were growing from the old branches of a fallen tree.

Finally, we were shown a more dramatic form of nature. Following on from last week’s quiz, Leanne had captured pictures of both fork lightening and sheet lightening.

Here, on the left, you can see the sky lit up by the recognisable fork lightening and on the right, the eerie impact of sheet lightening.

After a quick comfort break, we took a look at some more pictures as part of our ongoing development of the ‘Planticons’. We decided that this picture of a dark tree enclosed path represented our feelings of being

lost, isolated and scared, so that was added to our list. We also chose one of Leanne’s photos of lightening to add to the list

since it illustrated so well that feeling of chaos, feeling explosive. And, before someone points it out,  whilst lightening is not a ‘plant’ it is part of nature and so has earned its place in our ‘Planticons’!

Just time for a couple of rounds of one of our favourite games – Who Am I? Tony quickly recognised himself as President Trump whilst Rex took much longer and some musical clues  before he identified Michael Jackson. Just beat it!

Checking out the most popular planticon chosen this time was daisies. A great group, playful and fun, and looking forward to meeting again next Wednesday.

We finished the group with people generally feeling uplifted and more comfortable. As well as some lingering difficult feelings,

Bluebells (Comfortable) and Daisies (Playful and fun) were the most chosen planticons. Looking forward to meeting up again next week 🙂