Destruction for life / beauty and brokenness

“For a seed to achieve it’s greatest expression, it must come undone.  The shell cracks, it’s insides come out and everything changes.  To someone who does not understand growth, it would look like complete destruction.” Cynthia Occelli

There seemed to be themes of both destruction/growth and of reconnecting/reconciliation through the day starting as we welcomed back Fiona from a long sabbatical who has been very much missed by the group and so were pleased to have her back in the group once more.  Hazel joined us for a third time today and feels very much part of our group.  Mac who is one of our doggy visitors was welcomed (and much petted) enjoyed his day at Greencare, animals visiting our group always bring great joy and love.

We had a late check-in as we waited for David who was travelling back from Oxford.  This meant ‘holding’ difficult and some ‘too sensitive’ thoughts, that were then eventually able to be shared.  One of our members felt that sometimes not sharing leads to feeling worse, and means missing out on feedback which is nice and feels reassuring as we learn our feelings, and even if there is a fear they would be thought ‘silly’ are still valid.

There were a lot of people on site today from a company who were sponsoring a project run by Groundworks and we were invited to share in their lunch cooked by an award winning chef, Young Chef of the Year 2016!  This provided an unexpected opportunity for connecting with new people and re-connecting/reconciling after a misunderstanding.

This difficult situation arose on Tuesday this week as we hosted an Easter gathering welcoming members of the Embrace group during which we hid Easter eggs for a hunt later in the day.  Due to a misunderstanding they were picked up by a member of Groundworks who thought they had been left behind by another group who had been on site at the weekend.  This felt like a difficult situation, it was this Groundworks team member who invited us to lunch which was cooked by her award winning son.  This allowed us to feel re-connected and reconciled.

After lunch we played pick-up sticks (Hils was a ‘stickler’ for the rules!) which brought back fond memories of games played in childhood.  We then tackled jobs which were overdue such as brushing down the roof  and brushing fallen leaves that had settled around the base of the yurt.  We also planted seeds from the Woodlands Trust as part of their project to plant 64 million trees by 2025.  The photo is of one of the seedlings that provided a brilliant metaphor for Greencare today. 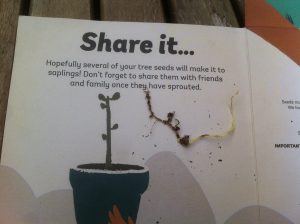 This little seed grew its root and seedling, roughly equal in size, in a polythene bag in cardboard without light or water, amazing how nature nurtures despite adversity.

We bid a fond farewell to our new friend Hazel who has been a very welcome visitor to both the Embrace group and Greencare, another branch member and another ‘nut’ (hazel) on our Greencare Tree.

Come back and visit us when you can!