Back after the Christmas break and it’s been a windy one!

Check in was both positive and difficult, but it was good to be together again.  We had messages from some of the group letting us know that they could not be with us today and we missed seeing them after the long break.  We are very much looking forward to seeing them next week.

It was a challenging day for some of us due to lack of sleep, broken arm, challenging material and a blown over greenhouse.  Unfortunately we only managed to save a few seedlings which we transplanted into pots.  So we will still have something to harvest later on in the year.

Sharon Neil and Hils cooked lunch which was potato and leek soup and of course egg mayo.  Sharon was a trouper and still managed her culinary magic despite having a broken arm in a bright red cast. Whilst the others swept up around the yurt after the storm had blown the leaves all around. 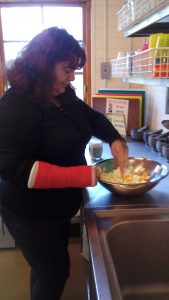 Neil brought in a carrot cake which Sharon hadn’t tasted before, she is not in any hurry to taste it again.  Everyone else thought it was delicious, James had two slices! 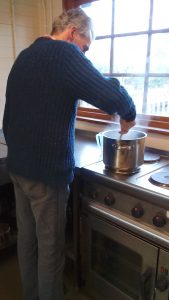 After lunch We took down the Christmas decorations which made the yurt feel so bare.  We look forward to putting all the pictures back up next week. 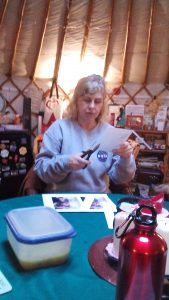 Pauline trimmed the photos from the Christmas gathering as Hils doesn’t have Vanessa’s skill in printing.

Then all that was left to do was fill in our diaries while we chose Planticons to represent how we experienced Greencare today and have an early check-out. 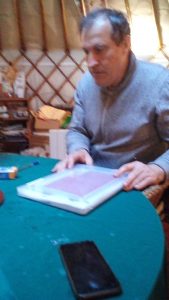 Time to write our diaries and chose our planticons

We finished early to as some of the group had to catch the bus home.  Our feeling are really yurt! (only joking)