Today “flowed like a beautiful brook across the open fields”. We started with some imagination the sea sound of the M25 recounting our favourite coastal visions.

Check in was a bridge between thoughts and effects of painful pasts and productive hope for the future. Intense – but supportive and productive.

We thought about the final day when we take the yurt down and, with Rex, the group wrote an email to the future yurt commandeer on some practical details and we had much discussion on what to do next! Good fun with Rex being his normal ‘Rex’ – brimming over with imaginative plans 😊 (and ignoring Vanessa being annoying and bossy!) 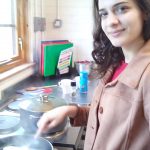 Then we broke into two groups – one went to the kitchen where Alexia brought nectar from her Cypriot homeland and showed us how to create the healthy bulgar wheat dish Pourgouri. The other group spent considerable time trying to work out the combination for the padlock on the shed (eventually we got there but too late to clear much out!). Back together in the yurt for a truly fabulous feast of fantastic food.

We are now converts to bulgar wheat – here is Alexia’s special recipe: 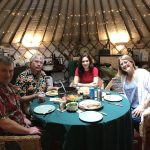 After we recovered from lunch we had a little music and dance festival in the yurt with Johnny was musical maestro on his mandola, and all members (including Duke) dancing along. 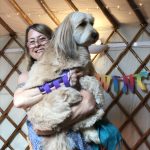 Then three games of Uno – champions being Johnny, Lynda, and, of course, Vanessa (without cheating!)

Check out and choice of emoticon left us feeling mindful, happy, positive – and worn out!