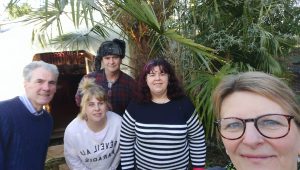 It was a later start to the day as we waited for one of the members to arrive.  Check in was as usual supportive as feelings were running high with anger and frustration, but people felt better for having the opportunity to vent.  Everyone was glad to see Sharon as at first we weren’t sure we would see her, but she did come in and we were all relieved that she was able to get to group.

After a quick comfort break we got the kettle on again and settled down to plan the day.  We all supported each other about the ending of the Greencare group at Iver Environmental Centre on the 31st of May. Greencare means so much to it’s members so there was much sadness and some frustration.  We were especially missing Lynda, James and Jayson who weren’t with us and so we weren’t all together in the same place with them to be able to share our feelings about the Greencare group.  However, they were very much on our minds and so with us in spirit.  Hils was disappointed that she was not able see them before going on leave.

The group split into two groups, one being a lunch making party and the other a Yurt tidying party and soon sat down to a delicious lunch, yum yum.  We found ourselves talking about nostalgic things from our childhood such as Cream Soda and bags of penny sweets, Corona fizzy pop which Pauline missed out on until she was 12!  How the shops and towns of our childhood had changed and what we missed.  We talked about Hils going and having fun in NZ and how much she will be missed, and also that Neil will be missed too as he isn’t back to group for about a month.   Hils has promised that she will learn the Hakka  while she is away on the understanding that if she does, that everyone will learn it on her return in March. 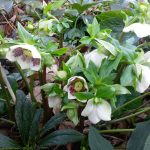 It was such a beautiful day everyone wanted to go for a walk.  The environment centre had begun to spring into life with early spring flowers poking through, beautiful birdsong and warm sunshine. Such a difference from the day before when Sharon got wet waiting for the bus, and Neil found himself steaming as he was drenched in a shower of rain.

On our walk Neil confessed that he had not undergone our traditional initiation activity that all visitors and new members undergo which is to come down the slide and be photographed doing so for the blog by way of introduction.  He was such a good sport as he admitted that he had been dreading doing it, and Hil’s camera would only take videos for some reason (or at least so she said, shhh) which meant poor Neil had to pose a number of times. 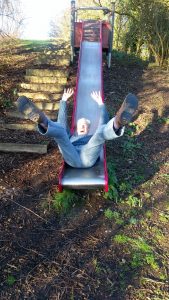 At last it was time to write this blog, choose our Planticons and check out for this week.