It was the table cloth! Or how did you feel about the chicken? 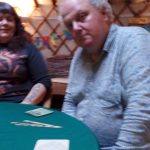 We teased Rex about his shirt, but we really liked it – very stylish!

The group felt that check-in was good as there were only a few people and there was space to off-load.  It was good to see Rex again – but that didn’t last for too long! (only joking)  He sat resplendent in his ‘Sacha Levy’ forget-me-not  patterned shirt. However, Johnny said he was reminded of a colour blindness test.  In feed-back we explored how not to let the stress glass overflow, and how to take the Yurt-fullness home, in particular it’s stabilising effect.

In our planning meeting we gave some thought as to what must go with the yurt to it’s new home.  Johnny was pleased that all of the Greencare members would still be able to attend the group when it moves.  In a playful mood we invented new words such as, ‘we love yurt-shirt’,  ‘thank yurt very much’, ‘thank yurt for your time’.

Soon it was time for lunch which we prepared once again on the wood burner, it’s so much fun.  The delicious baked potatoes, topped with lots of butter, baked beans and cheese, real comfort food, scrumdiddlyumptious! 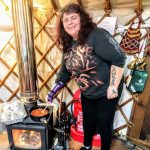 Rex showed us a video of Rex’s new pup, playing with its littermates, so cute.  He is thinking of having her trained as a pat dog.  We sent messages to those members missing today, we always miss people when they aren’t with us in group.  We had to clean up after our rodent squatters and throw away items where they had ‘been’,  we made the yurt spick and span and emptied the fridge, we realise this sounds boring, however, it feels like fun when we do it together – very Mary Poppins!

After lunch we played an interesting game of Uno, in which the girls were a delight and the boys were not so much, they were a bit of a trial actually.  Rex revelled in mischief, causing Hils to pick up almost too many cards to hold.  It did concern us somewhat to observe Rex constructing his own personal pentangle, he wouldn’t reveal whom he was summoning.  Rex really wanted to play pick-up-sticks, which we did, and of course, once again Sharon was the Pick-Up-Sticks Queen beating Hils by 1 stick.  Rex was a bit of a cheat, when he made a stick move his mantra was, “It was the tablecloth!” (hence the title above) 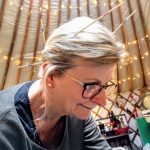 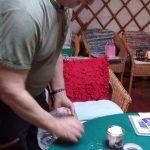 Johnny collected the melted candle wax which he takes home to reuse the wax for new candles.  He sometimes adds colour and fragrance, we are such a talented resourceful lot.

We wrote the blog and it was like herding mist, but that was OK as it was all due to everyone being playful and happy.  When asked how did people feel about the check-in, someone misheard this question as, ‘How did you feel about the chicken?” (hence the title above).

In check-out Johnny  felt that it’s nice to get home after a nice day feeling he has achieved something, ” I feel more serene and becoming comfortable in my recovery.  Even if there are bad times ahead, I know it will change in a few days.”

The day being done, we were ready to wend our weary homeward after another day filled with Yurt-fullness.