We started welcoming Alexia who was visiting us today, but she tells us she is coming back hopefully and has promised to introduce us to a delicious Cypriot bulgar wheat recipe.  Hils said she would complement this with her special salad recipe.

Check in was acknowledging family and how they shaped our lives, what we might wish to change, how we interact, and how we can’t necessarily change them, we can look after ourselves and we learn to do this over time.

Missing lots of old friends today, Sharon, Lynda and Jayson and our new friend Ippolito.  This meant that with our visitors, the professionals outnumbered the group members.  This could have felt intimidating, however, it felt more like the sort of day when you could have brought your games into school.  However, we also talked quite deeply and covered difficult topics.  It felt safe.

After a quick break we had a planning meeting deciding what we would do for the day and also what was happening with the yurt in the future, and how it feels more positive that the yurt will have a new home in Slough and will be co-created by our current group members. 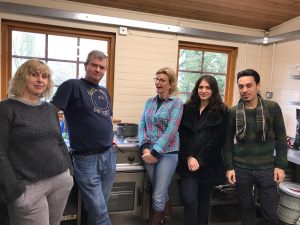 We decided that we wouldn’t split into groups but cook together and we decided that it is not true that too many cooks spoil the broth, rather that it is more fun.  Soup Chef Johnny made his recipe of asparagus soup, a new flavour now in the Greencare Soup stable.  While we enjoyed our soupy treat, memories were evoked of food we enjoyed in our childhood and we reminisced together.  We talked again about family which seemed to be a theme today.

After lunch we played a few games of Uno, Hils won one, Vanessa won one, and Pauline won one.  There was some kerfuffle over what the rules were, but we were able to agree to what they were.  Alexia hadn’t played before and so was happy to discover a fun game to play. 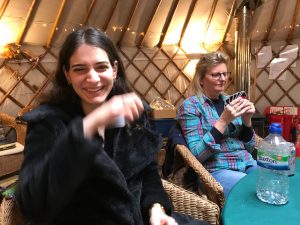 After washing up, we took Alexia on a tour of the site, and yes, she did undergo our initiation ceremony.  In fact, we all had a go, we were in such a playful mood. 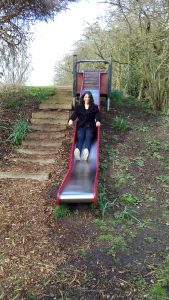 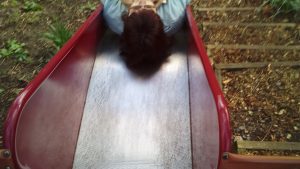 Vanessa down the slide too 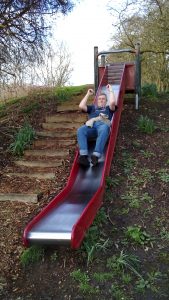 We visited the plants and discovered that they had been blown over once again. 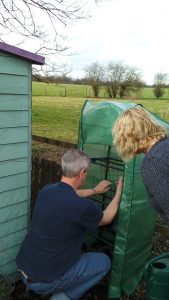 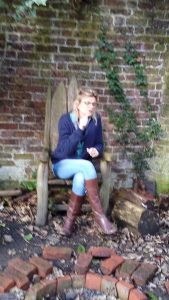 We played in the storytelling corner, Vanessa told Hils to sit on the storyteller’s chair and tell a story, Hils was really rubbish at this, so she was helped out by the group, each saying a sentence. Another game is born. 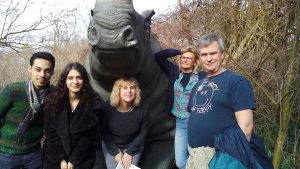 Visited the Rhino, or dinosaur, depending on your point of view. 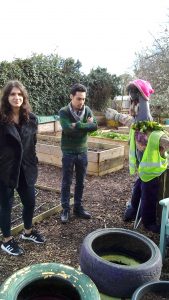 It was then back to the yurt, for a drink and to write the blog before check-out and choose our emoticons for this week.  It was then time to wend our weary way home.  Unfortunately, there is no Greencare next week, but we are looking forward to seeing each other again in a few weeks.