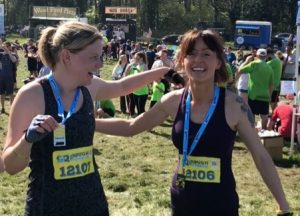 They raised a staggering £1400 from over 40 supporters and on the day completed the course with great acclaim!

You can see a short video of part of their run on the GBL YouTube channel – click on this link https://youtu.be/uhYf73pbBCw

This was the story Hayley wrote:

For over 20 years my mum Lynda has suffered with severe Bipolar and Personality Disorder. In 2015 mum was having a difficult time and had to spend 6 weeks at Prospect Park Hospital. On discharge the ASSIST team offered support to mum and suggested she looked into some of the groups Slough mental Health team offered. Mum has always found socialising and trying new things challenging but she agreed to try Greencare. Mum attended and we were gobsmacked when she returned full of joy at the things she had done, raving that it was the most peaceful and beautiful place she had been. She described it as having found a a little piece of paradise. From this mum has blown us all away, it has opened so many doors for her. She is now a trained mentor, attending various different groups several times a week, reviews other mental health establishments, attends the Royal college of Psychiatry, gives speeches at events on mental health, the list is endless and this space isn’t big enough to write about them all. What i can say is her life has changed completely, yes she still suffers with mental health but she now has a purpose, she is finally doing what she has always dreamed of. Rather than sitting in her bedroom 7 days a week i see her leave the house off to a group or meeting, standing tall and proud with a sense of purpose. I cannot describe to you how special this is to us. All of this is thanks to Greencare where it all started. Mum still attends every week and loves it just as much. BUT they get no funding, they are in desperate need to replace some items like the wood burning stove to keep warm, as well as somewhere to store the logs and other items for activities.Myself and my best friend Sam are going to run Rough Runner a 15k plus 20 obstacles, a course for athletes (god hep us). We are fundraising to keep Greencare going, to keep this special place going for those that need a little piece of paradise in times of difficulty. Thank you for any help.