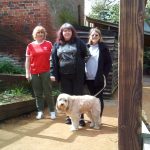 It was really great to have a full complement of Yurties at the Greencare group. Some members hadn’t been at group for a few weeks so it was good to be back. “After a break, Greencare was really needed today, it was like coming home.” There was a feeling of, “Glass is feeling full, but now everything fine. After a day of Greencare everything feels more manageable.” 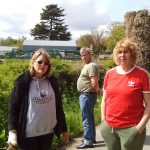 Check-in felt heavy, however, Neil’s poem resonated, “It felt like a reality check and provided some understanding of what we were going through.” We thought we would publish the readings we bring on the blog as, “It is nice to have as a future thing to remind us.”   Some of the blessings and poems have been included at the bottom of this blog. The group felt that it was settling to come back and unload, and that they had been looking forward to check-in. “Biggest sigh of the week, feels like the spring opened up gently.”  “Angry but no knowing why so check in was a relief.” 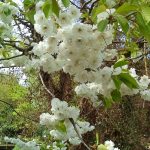 In our planning meeting we decided how to tackle sorting out the yurt in preparation for the move. We also discussed the future, possibility of access to training and how we might work together as a group to co-create the Greencare group in its new home. The group thought about ways forward and how the group together can be strong. 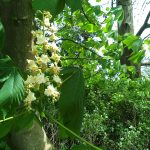 For lunch, we broke with tradition in that there was no egg mayo, no bread, instead we tried new foods namely baked Camembert and we finally sampled the Marrow Chutney which was made two years ago with the help of Fiona whom we miss very much. Lynda saw lots of beautiful Gerberas in different bright colours when she was at the shops recently and thought of Fiona as they are one of Fiona’s favourite flowers. 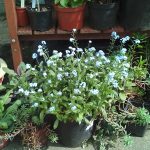 The conversation also ran to what we might like to do next week, perhaps an outing to walk amongst the bluebells in the local woods before they disappear. (the bluebells not the woods).  In the meanwhile we toured the environment centre and noted how quickly it changed week by week with more beautiful blossoms appearing.  Also, we discovered new neighbours, lovely cows in the next field. 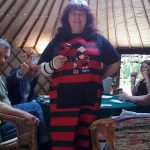 Sharon (or is it Minnie the Minx?) sporting Neil’s gift of a Dennis the Menace apron.

Last time Neil was in group, he and Sharon discovered they had something more in common, that they were both long term members of the Dennis the Menace Fan Club! This inspired Neil to pass on his Dennis the Menace apron to Sharon, both because she shared his passion for said comic strip hero, and also because of her talents in the kitchen.

While the boys did the washing up, the girls (and the boys when they’d finished the dishes) sorted the Yurt out, de-cluttering in preparation for the move, after which we played a game of Uno with the terrible two, Johnny and Neil, who played killer cards to Hils and Sharon.  Also Neil has an evil titter, he truly deserves his title, ‘The Silent Assassin’.  He told us he actually loves the title!!  Lynda who rarely plays, won the game triumphantly (she wasn’t sitting beside the terrible two so escaped the dealt killer cards).

That being done, it was time to write the blog and check-out for another week.

As promised, here are some of the readings that have a great deal of meaning to those who shared them with the group, and resonated with those who listened.

It doesn’t interest me what you do for a living. I want to know what you ache for and if you dare to dream of meeting your heart’s longing.

It doesn’t interest me how old you are. I want to know if you will risk looking like a fool for love, for your dream, for the adventure of being alive.

It doesn’t interest me what planets are squaring your moon. I want to know if you have touched the centre of your own sorrow, if you have been opened by life’s betrayals or have become shrivelled and closed from fear of further pain.

I want to know if you can sit with pain, mine or your own, without moving to hide it, or fade it, or fix it.

I want to know if you can be with joy, mine or your own; if you can dance with wildness and let the ecstasy fill you to the tips of your fingers and toes without cautioning us to be careful, be realistic, remember the limitations of being human.

It doesn’t interest me if the story you are telling me is true. I want to know if you can disappoint another to be true to yourself. If you can bear the accusation of betrayal and not betray your own soul. If you can be faithless and therefore trustworthy.

I want to know if you can see Beauty even when it is not pretty every day. And if you can source your own life from its presence.

I want to know if you can live with failure, yours and mine, and still stand at the edge of the lake and shout to the silver of the full moon, ‘Yes.’

It doesn’t interest me to know where you live or how much money you have. I want to know if you can get up after the night of grief and despair, weary and bruised to the bone and do what needs to be done to feed the children.

It doesn’t interest me who you know or how you came to be here. I want to know if you will stand in the centre of the fire with me and not shrink back.

It doesn’t interest me where or what or with whom you have studied. I want to know what sustains you from the inside when all else falls away.

I want to know if you can be alone with yourself and if you truly like the company you keep in the empty moments.

I bless the night that nourished my heart
To set the ghosts of longing free
Into the flow and figure of dream
That went to harvest from the dark
Bread for the hunger no one sees.

All that is eternal in me
Welcome the wonder of this day,
The field of brightness it creates
Offering time for each thing
To arise and illuminate.

I place on the altar of dawn:
The quiet loyalty of breath,
The tent of thought where I shelter,
Wave of desire I am shore to
And all beauty drawn to the eye.

May my mind come alive today
To the invisible geography
That invites me to new frontiers,
To break the dead shell of yesterdays,
To risk being disturbed and changed.

May I have the courage today
To live the life that I would love,
To postpone my dream no longer
But do at last what I came here for
And waste my heart on fear no more.

A mighty wind blew night and day.
It stole the oak tree’s leaves away.
Then snapped its boughs and pulled its bark
Until the oak was tired and stark.
But still the oak tree held its ground
While other trees fell all around.
The weary wind gave up and spoke,
“How can you still be standing, Oak?”
The oak tree said, “I know that you
Can break each branch of mine in two,
Carry every leaf away.
Shake my limbs, and make me sway.
But I have roots stretched in the earth,
Growing stronger since my birth.
You’ll never touch them, for you see,
The are the deepest part of me.
Until today, I wasn’t sure
Of how much I could endure.
But now I’ve found, with thanks to you,
I’m stronger than I ever Knew.”